Can dogs get the flu? 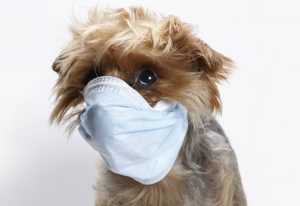 Sadie Mae has the flu

Dogs can get the flu, also called kennel cough.  The symptoms are much like our own flu and are usually mild in most dogs. However, a new strain that’s hit the Chicago area has dog lovers worried. There is a vaccination against canine influenza but is it worth the risks for your Morkie?

More than 1,000 dogs have been treated for the latest strain of flu from Asia — in the Chicago area alone. Five dogs have died from the illness. Canine influenza is caused by specific Type A influenza viruses, and there are two of them: the H3N8 virus and the H3N2 virus.

How is it spread?

Canine influenza can be airborne, thanks to coughing and sneezing dogs, or it can be spread by nose-to-nose contact.  This flu is spread among dogs in close quarters such as kennels. So if you suspect your dog may be coming down with this flu, keep him away from other pets.

What are the symptoms?

This type of canine influenza has symptoms a lot like our own flu: it’s a respiratory illness that often includes stuffed nose, fever, coughing and loss of appetite. It takes about 3 days for the illness to develop and dogs are contagious for up to 14 days.

Although very severe cases can result in pneumonia, fortunately, about 80% of dogs have very mild symptoms and the illness does not get that far.

Can YOU get this flu from your dog?

So far there’s no connection between canine and human influenza and it doesn’t appear the latest strain can jump the species barrier.  This strain, known as H3N8 influenza, was originally an equine disease that spread to dogs.  In 2013, a severe flu that began in pigs, jumped across to dogs, sickening many and killing several. However, the CDC (Center for Disease Control in Atlanta), is monitoring this strain and others to see if it could be spread to people.

“Internet Vet” Dr. Andrew Jones, puts this is some perspective with numbers:

That means the odds of your dog getting the disease are just over 1 one-thousandth of one percent.  Keep in mind:

There is a vaccine, BUT…

Although there is a canine influenza vaccine, it is not one of the core vaccinations and many owners question its value versus its risks.  And remember, if you DO decide to get this vaccination, separate it out from other shots. The more vaccines that are combined at once, the greater your small dog’s chance of an adverse reaction.

As always, please consult with your Veterinarian before deciding about vaccinations and other treatments; and if your Morkie exhibits any of the symptoms of canine influenza, be sure to see your Vet right away.