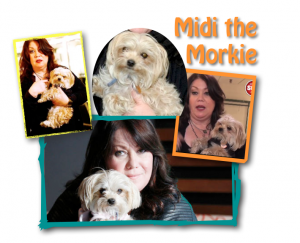 Here’s a list of just some of the celebrities who own Morkies … Singer songwriter Jann Arden has a little Morkie called Midi (midi is short for Musical Instrument Digital Interface) is a technical standard for music that’s just too complicated to go into. You may remember that two years ago, Ms. Arden and Midi were tossed off Via Rail between Ottawa and Toronto.  Even though Midi and her dog carrier were perfectly visible throughout the trip, including check-in, an overly zealous porter noticed she as travelling with a dog around Oshawa, and offered her the choice of stashing Midi in the baggage car or finding another way to get to Ottawa.  Midi and Jann were soon standing on the platform as the train pulled away. 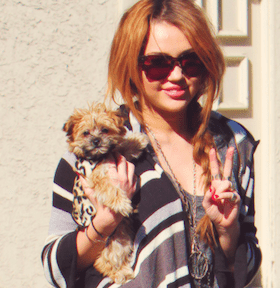 Another well known singer/actor who has a Morkie?  Miley Cyrus.  Sadly she used to have a Morkie, called Lila who was the love of her life based on her Tweets about Lila.

Miley Cyrus and her Morkie Lila

In December 2012 little Lila passed away. Lila had been through surgery earlier and seemed to be healing just fine. But Miley’s other dog, a much larger one called Ziggy, “grabbed” Lila during play and that was it.

Miley took a long time to get over the loss, and to this time will mention Lila wistfully. 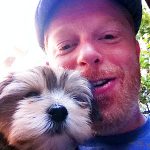 Jesse Tyler Ferguson and his partner Justin Mikita with their Morkie “Leaf.”

This past June (2014) Miley suffered another dog-astrophe. Her 2-year-old dog Floyd, a huskey mix, was killed during a horrible coyote attack.  She’s replaced Floyd with a Collie called Emu. We wish her the best of luck with her new dog!

Ferguson is one of the most talented actors in Hollywood today – starring in the award-winning Modern Family. In fact he has received 3 Emmys in a row for his part as the uptight lawyer Mitchell Pritchett.  On the Golden Globes red carpet in 2012, Jesse told Ryan Seacrest that he had a message for one of his little ones – Morkie pup, Leaf. “You be good, Leaf, and go to bed,” Ferguson said. “That’s what I’m going to say when I win. Oh wait – I wasn’t nominated.”

Rapper Drake and his new Morkie (with the breeder)