Dog napping with a happy ending

When this cutie went missing in Ottawa, Canada’s capital city, owners acted fast to get him back. 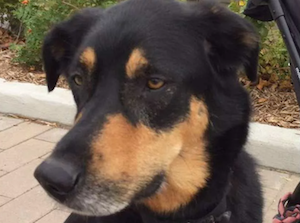 While a couple enjoyed a Saturday lunch downtown, dognappers got to work and stole this Lab/Shepherd cross who’d been tied up outside. The owners were aghast; they flagged down a passing police cruiser and explained the situation.

The officer told them to go back to the restaurant — the scene of the crime — where police could get more information and interview potential eyewitnesses. He also suggested the owners use the power of social media, and post to both Twitter and Facebook. Besides doing that, the owners directed their posts to a local Lost Dog group, and the message spread fast.

The police officer’s third recommendation hit pay dirt: he told them to call nearby pet supply stores and pet food outlets. A clerk in one of these stores recognized the description of the dog and after viewing the store’s security video, the couple immediately identified Sage as their missing dog.  The dog was returned within hours, unharmed but “quite a bit more clingy” according to the owners.

What they did right

While leaving their dog outside the restaurant, out of their site while they ate, was clearly a careless mistake, the couple did several things very well:

Dog theft is definitely on the uprise, Why are pets stolen? Besides being sold to research labs or pet stores, they are used in bait and for dog fighting rings, in puppy mills to breeders, for fur (yes fur!), as breeding partners for dogs, and by sadistic individuals. This is definitely something you DO NOT want to think about for your little Morkie. So please take more care than ever, in this strange new world.

Another way to protect your Morkie

Amazon.com and other outlets, offer pet GPS devices which help you track exactly where your animal is at any given moment. One which comes highly recommended is shown below – the XCSource Pet GPS. It’s a little on the larger side for really small dogs (2″ disk), but check it out. There are others as well.

They work by tracking your Morkie in four dimensions: Realtime tracking,GSM quad band network, all global GPS location. You can see where he is, by checking the company’s website, using an App for your phone, or by having a message sent to your phone’s text.