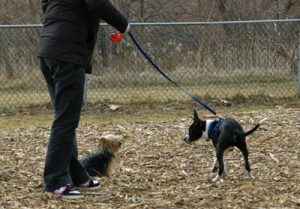 Are dog parks safe for small dogs? It seems they are not – a quick search on Google pulls up story after story of Yorkies, Maltese and other popular small dogs killed or seriously injured at dog parks. Many have been mauled by large dogs, while some were simply stepped on and seriously injured.

Many dog parks have a specially fenced, segregated area for small breeds. However the definition of ‘small breed’ can be misleading. Most suggest these areas are for dogs 30 pounds and under. If you have a particularly small Morkie, say 4 to 5 pounds, you can see just how outweighed your pooch can be.

Are these dogs too different in size to play together? Many people say yes – it’s dangerous for the small guys!

Not an isolated incident

One courageous Yorkie owner in Buffalo, N.Y. shared her story so that others might be spared the pain she’s endured.

Her little dog was simply ‘run over’ by larger dogs, all of whom were playful and friendly. It was a matter of size, and a paw that must have come down on the small animal the wrong way. His neck was crushed, and the pet died on the way to the Veterinarian’s office.

Letting her dog play at the park was “a very bad decision that day,” the owner said. “I’m worried that someone else will make the same bad decision if they don’t hear this story.”

At another park in Charlotte, North Carolina, a bull mastiff mauled and killed a 12 pound Yorkshire terrier-Chihuahua mix within seconds, before aghast bystanders could intervene. This incident was particularly ugly because the mastiff owner gave the victim his name and a false phone number.

Many dog parks ban un-neutered animals from the site; however, some pet owners ignore that provision, and allow their more aggressive animals to run, often roughshod, over other dogs.

It’s a big mistake to assume that every dog in the park is a well-mannered, well-trained pet. Just because the big dog is playing with other dogs does not mean that he will play well with your Morkie. 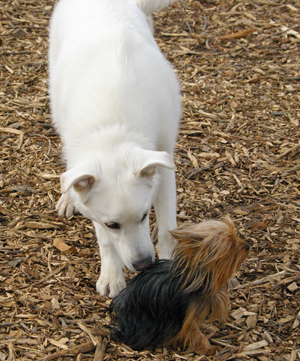 Why do people go to dog parks?

Generally they’re used by people who don’t have a lot of space for their dogs to run, or don’t have a safely fenced area for running.

The second reason is to ‘socialize’ their dogs.

These are good intentions all right, but there are some serious issues with dog parks across Canada and the United States: 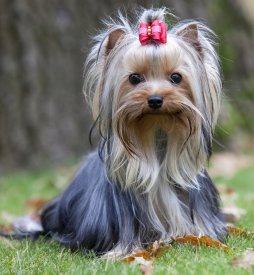 If your Morkie is outweighed by the other dogs at the park, even in the ‘small dog’ zone, it’s a good idea to simply leave. The larger dogs can be well-meaning or vicious, but the result can be the same: a fatally injured small dog that should have been protected better by its owner.

If you’re looking for opportunities to socialize your Morkie or other small dog, why not try some local breed clubs? Many have fun meets and get togethers. Or check signs in your local pet food stores and veterinarians.

The bottom line on dog parks: avoid them altogether. It’s not worth the risk.