Dognappers and other Dirtbags

In Toronto, Canada there have been two shocking dognapping crimes within days. What can we learn from them to help us protect our Morkies?

This man was punched in the face and a knife was held to his neck, during a dognapping in a Toronto park.

4 thugs on bikes stole a small dog from the owner at knifepoint in a North York park on November 15th.

Police say a man was walking his dog when he was approached by four men, all riding bicycles. They say one of the men punched the dog owner, another put a knife to his throat, then the group took the dog and fled.

“Charlie,” a white female Shih Tzu-Pomeranian mix, has  not been seen since and the owners are absolutely distraught. Charlie is four years old, has long white hair, weighs 10 to 15 pounds and was wearing a blue Maple Leafs sweater and a black harness.

Charlie, the missing Pom-Shih Tzu mix who was stolen at knifepoint from her owners. 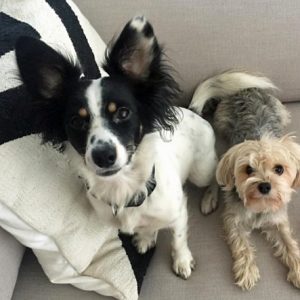 Two of the missing 16 dogs in Toronto. All were quickly recovered safe and sound, when the thief abandoned the van holding them.

Just 3 days later, a white Ford panel van containing 16 dogs was stolen outside a condo in the Fort York area of Toronto! The dog walker who owns the vehicle says the van was left running, but was locked.

This city of nearly 3 million went crazy. Social media went crazy. Who would steal a truck full of dogs? And did he want the truck and just got the dogs? Or the other way around?

This incident has a happier ending than our first story; within 24 hours, all 16 stolen dogs (and the dog walker’s van) were found. All dogs are safe and sound, and very happy to be home.

The thief hasn’t been found yet, but Toronto’s finest are not giving up.

An adorable Morkie like this could net a thief lots of money on the resale market.

What can we learn from these two very different incidents?

Police say purebred and designer dogs are prime targets — especially smaller breeds like Pomeranians, Yorkies and Boston Terriers — but even larger and mixed-breed dogs can be vulnerable. An adorable Morkie would make an ideal victim.

The ugly trade of pet theft is a serious problem. It is an organized, multimillion dollar business that lurks in shadows and goes unnoticed until it strikes your community, your home, your pet. Protecting your dog takes due diligence.

Next: a happy ending for one dognapping – and the lessons learned.