Feel guilty about having a purebred dog? 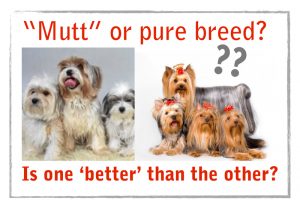 Sometimes the world seems divided between two kinds of people: those who feel pretty self-righteous for rescuing a mutt and those who feel a little guilty for owning a pedigreed or pure breed dog.

But as author Ted Kerasote points out, the real problem isn’t ‘which one is better?’ but  instead is all about:

Add to this, people see dogs as way to make some quick cash – the whole puppy-mill-to-pet-store continuum, and it’s a disaster.

“Some dog lovers feel that buying a purebred dog is ethically questionable because of health problems associated with overbreeding and inbreeding. At the same time, two million to three million shelter dogs in the U.S. are put to death every year.”

–Mark Derr is the author of “A Dog’s History of America: How Our Best Friend Explored, Conquered and Settled a Continent” and “Dog’s Best Friend: Annals of the Dog-Human Relationship.”

“Our out-dated approach to shelters relies on two choices for unwanted animals: euthanasia (the so-called high kill shelters) and trying to adopt out pets one-at-a-time in very ineffective and inefficient ways.”

For Kerasoste, careless breeding includes the so-called professionals who sacrifice a breed’s health, temperament and well-being to looks — witness the number of large dogs with hip dysplasia, small dogs who can hardly breath because of their extremely shortened muzzles and more.

One thing’s for sure: assigning blame to one side or the other won’t solve a thing.

Error: This Page access token belongs to a Page that has been deleted.
Type: OAuthException