We know dogs should not eat chocolate… but did you know…

Just one square of Unsweetened Bakers Chocolate could kill a small dog like a Morkie!

With Easter approaching fast, it’s good to remind ourselves just how dangerous chocolate can be.  There are two culprits in chocolate – the caffeine and theobromine, which is even more dangerous.

Unlike people, dogs don’t break down theobromine very quickly. So what we can easily handle, could make your dog very, very ill or worse. Theobromine is also found in tea and cola products.

Be sure to keep all Easter goodies away from your dogs.

With its fine texture and sweet smell, cocoa bean mulch is becoming popular with gardeners; it looks great and keeps your plants and shrubs moist and weed-free.  But like chocolate, it can contain toxic amounts of theobromine.  If your dog eats this mulch, he could get very sick or even die. 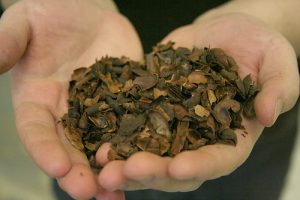 Cocoa bean mulch looks great in your garden, but it can be poisonous to dogs.

Symptoms of cocoa bean mulch ingestion in dogs include:

1. Alcohol – think it’s funny that your dog acts drunk? Just a small amount can cause vomiting, diarrhea, central nervous system depression, problems with coordination, difficulty breathing, coma, even death. And the smaller the dog, the greater the effect.

2.  Coffee, Tea, and Other Caffeine – no surprise since chocolate is a major source of caffeine too. But I remember letting my little dog lap up some sweetened tea from the saucer – she loved it – and I shudder.  The really sad part is, there is no antidote for caffeine poisoning.

3.  Grapes and raisins.  We don’t know why, but we do know that grapes and raisins can cause kidney failure in dogs. And just a small amount can make a dog ill.  In fact as few as 7 grapes could kill a toy dog!

4. Candy and gum – are often sweetened with Xylitol which can cause an increase in the insulin circulating through your dog’s body. That in turn can cause your dog’s blood sugar to drop dangerously.  Plus, Xylitol can cause liver failure.  Although it occurs naturally, Xylitol is a dangerous sugar alcohol – definitely not good for dogs.