For the Dads who love Dogs

Happy Father’s Day from the dog!

Seems like Mothers Day is just over, and now we’re looking after Dad with a Father’s Day from the Dog present. So what DOES the Morkie-Dad-Who-Has-It-All want?

You can never have too many t-shirts, so take a look at some of these cute ones. The perfect Father’s Day gift from the dog, the MORKIE DOG! And much more original than a tie.

There are dozens and dozens of other fun sayings too, so check them out.

Gifts from the dog

Have some fun with the man in your life this Father’s Day (Sunday June 17th) and order him a Morkie T-shirt from Amazon. Still lots of time to oder.

These shirts are all well-made and screened so the image lasts, but any problems, and you know Amazon – send it back!

– pour  D-A-D letters from pancake mix (hint: make more than one of each letter in case they break. Put oven on at 275 to keep pancakes warm while you make enough for everyone)

– I love you egg – drop a heart shaped cookie cutter into a well greased frying pan, and crack egg into it. Serve on toast.

– hugs & kisses toast – cut a big X and a big O from several layers of tin foil folded over (about 2″ high) then place on toast and carefully spread jam around the cut outs.

All I need is my Morkie and a coffee

My Morkie and I talk sh*t about you

It’s not drinking alone if your Morkie is at home

It always comes down to dogs 🙂

Father’s Day took a long time to catch on

According to Wikipedia, the idea of a Father’s Day celebration goes back to 1907, when a memorial service was held for a large group of men who died in a mining accident in West Virginia.

From there, a woman called Sonora Smart Dodd ran with the ball; her inspiration was her Civil-War-veteran father who raised 6 kids on his own.

She officially launched Father’s Day in 1910, but the idea fizzled out until many years later.

Left: U.S. President Lyndon B. Johnson holds his dog “Her” by the ears as White House visitors look on, April 27, 1964, on the White House lawn, Washington, D.C. At left is President Johnson’s other dog, “Him.” This picture raised criticism from dog lovers. (AP Photo/Charles P. Gorry) 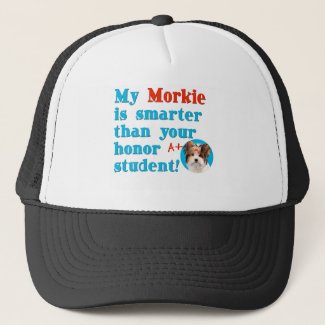