Watch out for these puppy scams

Puppy scams are at an all time high. Criminals often use free media – like Craigslist, Kijiji and Facebook.

One trick is to show you photos of a 6 week old Morkie, and claim he’s 12 weeks old. This is to convince you he’s a real teacup or micro Morkie. Ironically, you don’t actually WANT a teacup dog; find out why not:

Be Careful with Teacups;

How much should your Morkie weigh?

and this page, How Big Will My Puppy Get

Advertised puppies that don’t even exist

Scammers also advertise a dog that doesn’t actually exist – often at a very low price. “Just pay for shipping.” Riiiight! You pay a reasonable amount for shipping but before the puppy arrives there are additional expenses – the pet needs a different kind of crate, needs a health inspection; needs insurance, etc. for an additional fee. 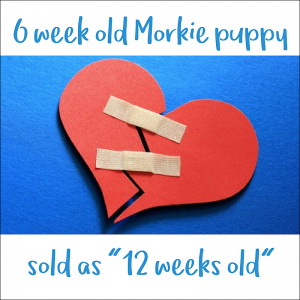 Here are just a couple of signs of scammers: 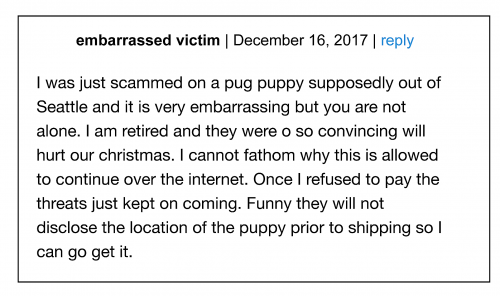 Buying a puppy online – sight unseen – is a recipe for heartbreak…

and an invitation to pet scammers

Besides being a hotbed of scams, pet buying online without “due diligence” is guaranteed to get you a puppy mill dog, if you get a dog at all.

(a) visiting the pet first;

(b) getting references from other buyers and checking them out and

(c) drilling down on the internet to learn all you can about the seller.

There are lots of ways crooks can get your money for nothing:

Be extra cautious of ads found in free classified ad sites such as Kiijii and Craigs List. You don’t have to avoid sites that run free listings — there are some legit ads on them– but do be extra cautious, because scammers feed on free places to find their prey.

As with online breeders, visit and do your research.

Beware of these pet scams

A common trick of swindlers selling dogs online, is to run an ad that features a gorgeous-looking little dog for sale. Should you buy and actually receive a dog, you’ll notice that your puppy looks nothing like the one you saw.

That’s because the scammer has stolen pictures from a legitimate person’s website and portrayed these as his. Usually, the actual dog is a reject from a puppy mill, or …. there’s no dog at all.

This is a one that’s designed to push up the price of your Morkie puppy. As much as we love Morkies, they are not purebred dogs. They cannot be registered with any Kennel Club, anywhere in the world. That’s because it’s not possible to track their parentage the way a group like the AKC (American Kennel Club) can for example.

“NO registry would let you register a mixed breed dog. If you found a registry that would, the papers would be worthless.” – from the American Kennel Club

There are several new organizations who claim to register the new cross-breed or designer dogs. Although their intentions may be good — for example, to track mixed breed dogs — there’s simply no way to keep liars and scammers out. All that’s needed is your signature to declare the dog’s a Morkie (or whatever. ) 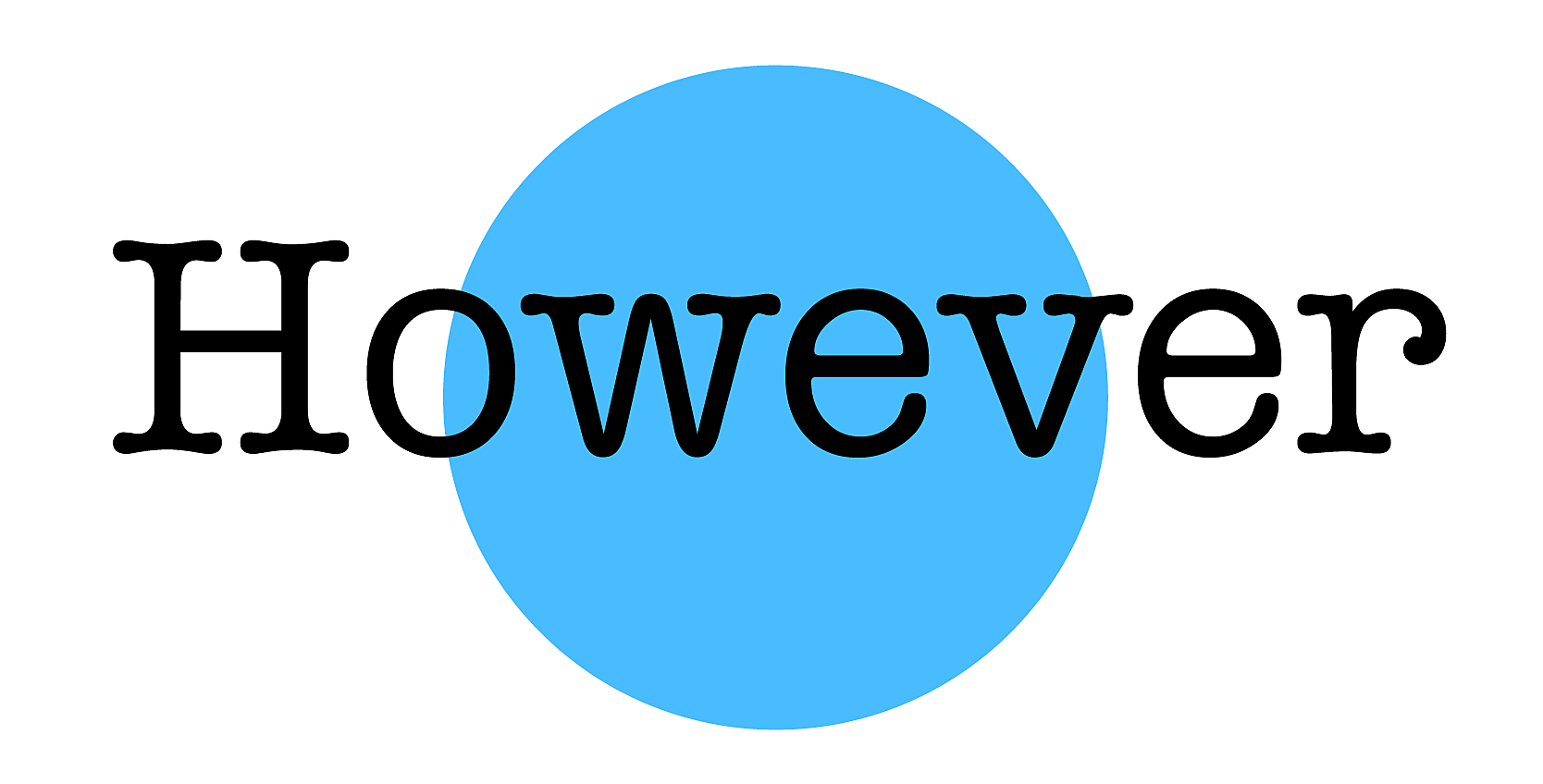 Most kennel clubs are interested in reaching out to mixed breed owners. AKC offers the AKC Canine Partners club, which enables mix breeds to vie for AKC titles alongside purebreds.

You can read more about AKC Canine Partners here.

Free or super cheap Morkies. This one is rotten, because in all likelihood, there isn’t even a Morkie involved.

Instead, the fraudsters lure you in on price or “free” and when the hook has been set, they ask you to pay for shipping, which is suspiciously consistent at $400.

“Just cover the cost of shipping.”

Buyers are asked to send payments via a Western Union wire transfer or money order. This is a favourite among crooks because it’s the equivalent of sending cash– the money can’t be traced and recovered by the victim.

You send the money off – and unknown to you, it usually goes to another country – and the dog, of course, never arrives. You can’t get your money back because you sent it with Western Union. 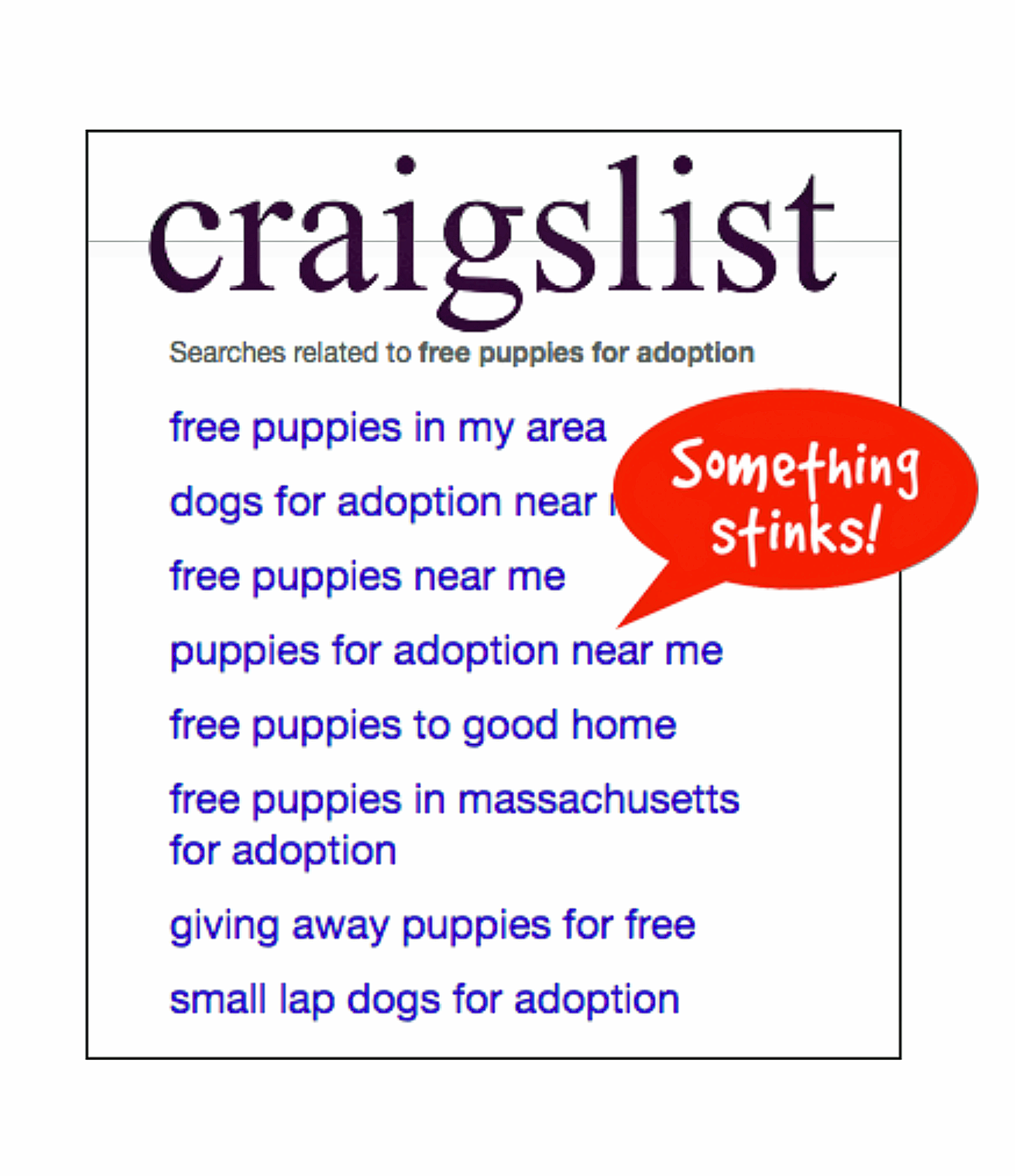 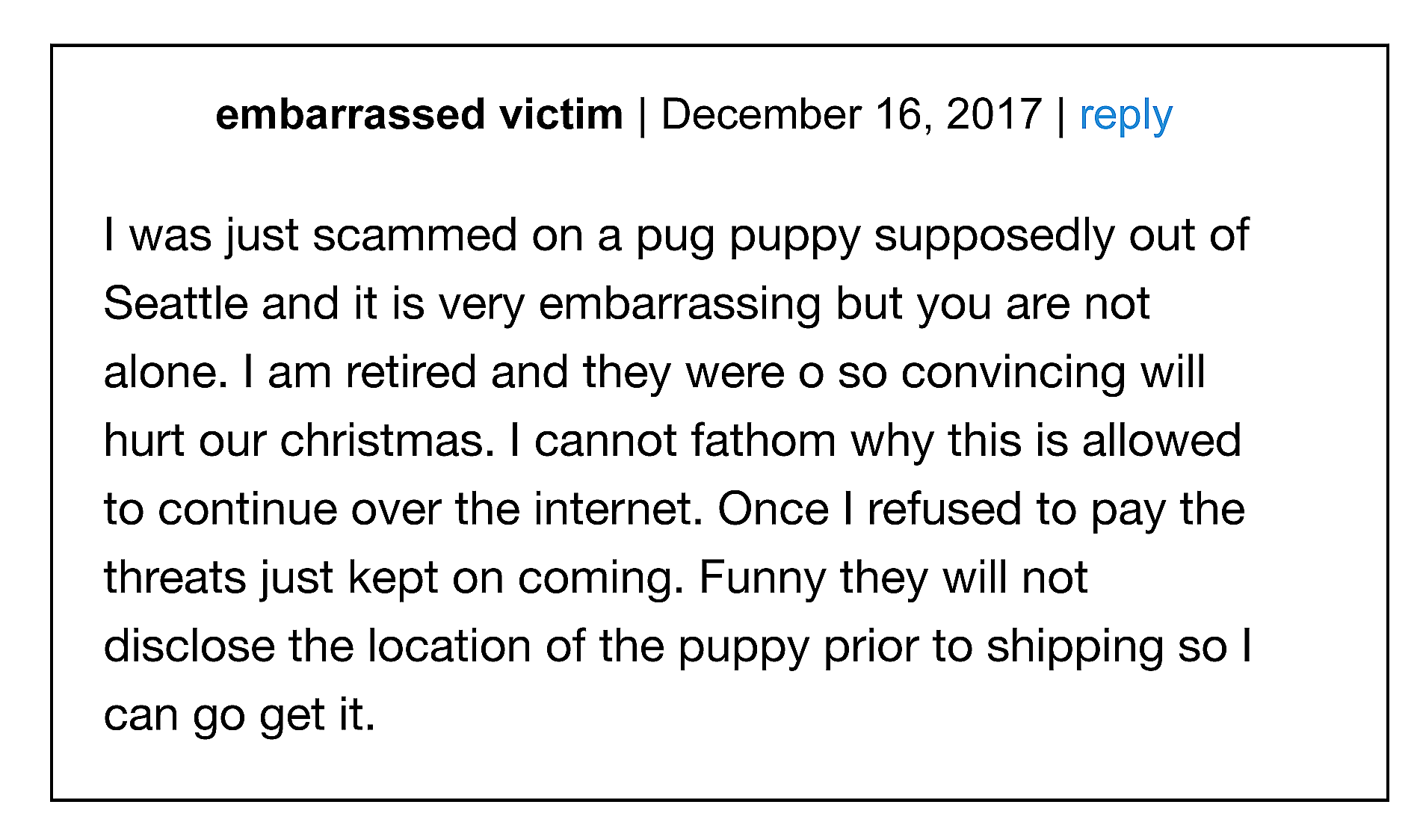 The ASPCA has identified another despicable trick.

Sellers put up a website featuring pictures of terrible animal abuse, and claim they are rescuing dogs from a puppy mill or even another country like North Korea, where dogs are regularly eaten.

There’s no rescue; they ARE the puppy mill, and the dogs are sickly, weak and nervous.

Instead of doing a good thing by helping dogs, you end up with heartbreak on your hands.

You can tell this is a scam when you see the price tag — the “adoption fees” or shipping for these dogs often exceeds $1,000! Breed rescue groups charge nominal fees – usually no more than $300, because their goal is to find good homes for their rescues, not make money.

How to spot a phony adoption group

Breed rescue groups online tug at our heartstrings, but too often they’re just a front for cast-off dogs from puppy mill operations.

“For-profit breeders have increasingly tried to take advantage of the public’s desire to adopt homeless pets by posing as rescue groups, even using the term ‘adopt’ when selling their, all too often, puppy-mill-raised pups”  — says Kim Saunders, Petfinder’s vice president of shelter outreach.

How can you spot the fakes?

1. Is the group listed on Petfinder? Breeders aren’t allowed to list on Petfinder; and all the adoption groups on Petfinder have been carefully screened and are legitimate.

2. Does the “rescue group” list mainly purebred or designer dog breeds — all puppies? Puppies are outnumbered by adult dogs for legitimate adoption, by about 8:1. So you should see 8 adult dogs for every puppy available, not the other way around. Seeing a pet listing with lots of purebred puppies and few or no adults or seniors may be a warning sign.

3. What services are included with an adoption fee? Legitimate rescue groups and shelters will be able to tell you the basics about the dog’s health and history. They adopt out dogs that are up-to-date on shots; neutered; and seen by a vet.

4. Can they answer your questions, like “where is the dog currently housed and can I visit him?” “Can I meet the pet before I adopt him?” A no to either of these questions should start alarm bells ringing. This is not a real adoption or rescue group.

5. Does the group interview YOU? Real rescues want to be sure their dogs are going to a forever home. They try to match owner to dog and are protective of their animals. Most require written applications and even references. Fakes just want cash or a certified check.