Outrageous news yesterday about the father-daughter team just outside Paris Ontario who had 80 suffering Morkies seized from their filthy, feces-filled house last July.

Darlene Dougherty, who lives at 831 West Dumfries Road, Paris, pleaded guilty to one count of causing an animal to be in distress.  She has been placed on probation for two years and ordered to pay restitution of $3,357.89 to the SPCA.

The Provincial Offences Act court, the provincial prosecutor and the justice of the peace decided in their infinite wisdom that this “negotiated settlement” is just.

She even gets to keep one dog and one cat!

When you’re in the puppy mills business like the Doughertys, $3,300 is nothing. Puppies sell between $500 and $1,000 and even more… so one litter could easily pay off the court fines.

“Rescued from a disgusting home”

You may remember reading about Dougherty and her father, Marshall Dougherty.

In July 2013, OSPCA workers raided the Paris home and found innumerable cats and some 80 small dogs, nearly all Morkies. 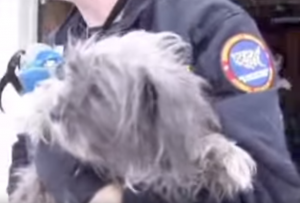 Officers entering the home had to wear protective clothing, gloves and masks due to the “unsanitary” conditions.

All the dogs have been subjected to dreadful conditions, neglect, underfeeding and total lack of medical care.

The fur was so badly matted that it couldn’t be combed out and the dogs had to be shaved, the SPCA reported at the time. Some also had rotting teeth, according to earlier reports.  Their paws were red and inflamed from the filth.

When this case broke it was reported that “the Brant County SPCA is dealing with the worst case of animal cruelty it has seen in 10 years.”

If convicted, the penalty could be as much as a $60,000 fine, two years in jail, or both. There is also a lifetime ban on ever owning an animal again.

OSPCA inspector Brandon James says they’ve never had to rescue so many dogs at once. 80 Maltese and Yorkies — from puppies to 16 years old — were living under the same roof on West Dumfries Road in Paris.

When James entered the residence with his team, he said he was unsure of just how many animals they’d find.

“We were expecting approximately 15 dogs, so you can imagine when you walk into a house with over 80 dogs, it was disgusting,” he said. “The smell and the sanitary conditions were a shock to the system.”

Next door neighbour Karen Groh says a dozen of the dogs ran out in front of her car on the road the other day. She’s seen at least three of them hit by cars and killed.

Dougherty no stranger to legal entanglements

If you google “Darlene Dougherty” you’ll see she’s been active in a number of local land-use hearings, objections  about Title Insurance and other court-clogging complaints. She’s definitely no stranger to laws and by-laws.

What can we do?

Many have email addresses for easy contact.  Tell them you’re disgusted and appalled with this case and ask what they can do about our toothless animal cruelty laws.

Two visitors check out the Morkies rescue form Dougherty’s nightmare home. Since the rescue, all dogs have been checked out and received medical treatment. In all, dozens have been adopted out, with families lined up to apply for the rest.


Warning: stristr() expects parameter 1 to be string, array given in /home/customer/www/aboutmorkies.com/public_html/wp-content/plugins/custom-facebook-feed/inc/CFF_Utils.php on line 505
Please enter the Page ID of the Facebook feed you'd like to display. You can do this in either the Custom Facebook Feed plugin settings or in the shortcode itself. For example, [custom-facebook-feed id=YOUR_PAGE_ID_HERE].