How to read a dog food label – Part I

First in an informal series on commercial dog foods.

When you’re shopping for commercial dog food – canned or kibble – here is an important place to start: the first 5 ingredients listed on the label.

Even though dog food labels may list dozens of ingredients, it’s the first 5 that matter.

That’s because dog food ingredients are listed in order of weight, so the closer to the top of the list, the more of that ingredient in the dog food.

Ol’ Roy is the store brand, or private label brand, of Walmart. It’s manufactured by Doane Pet Food, which is owned by Mars Pet Food Division. Virtually any website that compares commercial dog foods rates this one at the bottom of the list. (Mars makes other cheap pet foods like Pedigree, Cesar and Nutro.)

The first 5 ingredients in Ol’ Roy

Are dogs corn eaters? No, but that’s the first ingredient and it’s CHEAP filler.

Meat and bone meal is a nasty mix of waste animal tissues, including bone. Very hard for dogs to digest. And what kind of animal does the meat and bone meal come from? Could be any combination of cattle, pigs, sheep, goats…

Soybean meal does contain 48% protein. It’s probably included to boost the overall protein content of this food but it’s much lower quality than protein from meat.

Poultry by-product meal is made from slaughterhouse leftovers like chicken feet, backs, lungs and heads. If these leftovers are edible, they’re added to people food like bologna, sausage and hot dogs.

Not edible? Then add it to dog food, where it’s rendered (cooked at very high temperatures) until it is a dry meal.

Animal fat – again, what kind of a animal are we talking about?? If it doesn’t say, you don’t know.

And that means it can be spoiled supermarket meat, dead, diseased or dying cattle (the Three Ds of the meat world); road kill and even euthanized pets!!! It’s all legal.

MEAT is great for dogs because it’s a source of protein that’s complete. It contains all all ten essential amino acids — nutrients dogs cannot live without. Plus, dogs can easily digest it, especially compared to inferior protein sources like corn or grain. But if the meat is not named, it can be literally anything, including

Whenever a pet food does not name the TYPE of animal, but just says “animal” or “meat” instead of, for example,  “beef” or “chicken,” your guard should go up. That’s because the meat can be almost anything, and changes depending on what’s the cheapest in the marketplace.

MEAT BY-PRODUCTS are even scarier – by-products are slaughterhouse waste. The stuff that they won’t even put in hot dogs! The stuff they sweep up off the floor at the end of the day.

Sorry, but the rest of the world calls it crap! For example… “deboned chicken” is  literally chicken meat that we’d eat. “Poultry by-products” can be what’s left after the ‘real’ meat is stripped off. Stuff like the head, the feet, neck and internal organs that no other food processor wants.

Here’s an example of a label that you can understand, and that actually looks good. 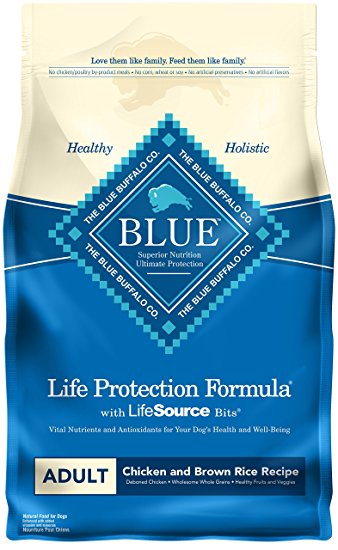 Now THAT sounds like something you’d want to feed to your Morkie!

To see how your dog’s food compares, check out Blue Buffalo’s web page Take the Test.