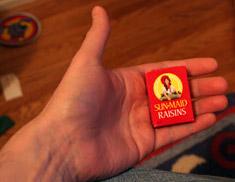 Mini box of raisins can poison your Morkie

A friend of mine has just come through hell – her toddler fed their 2-year-old Morkie one of the tiny, tiny snack packs of raisins.  Sun-Maid says there are about 14 raisins per box, weighing in at 1/2 ounce.

But that was enough to nearly kill their small dog.

The first hint of a problem came when the dog was very sick – vomiting and diarrhea. She was very, very quiet and lethargic and seemed to have abdominal pain.

Luckily my friend found the tiny raisin box and put 2 and 2 together.  She got the dog to vomit, thanks to a mixture of hydrogen peroxide and water, administered with an eye dropper. Meanwhile she called her Vet to say  they were on their way. The Morkie was put on IV and underwent a battery of tests to see if her kidneys were failing – the result of grape or raisin poisoning that almost always leads to a painful death.

Although blood tests don’t always show the toxicity of raisins, they do show other signs including increased blood calcium, phosphorous and creatinine.

The Vet put the dog on dialysis for about 36 hours until the good news – no permanent kidney damage! Thanks to the aggressive – and very expensive – treatment, the Morkie’s life was spared.

What makes grapes and raisins so toxic?

Scientists don’t actually know exactly what makes grapes so toxic, just that they can be deadly especially to a small dog. The ASPCA reports that a dog may get into grapes and eat some and be fine one time, then the next time, be deadly ill.

What if my dog eats grapes or raisins? 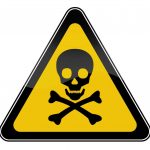 The first response should be to induce vomiting – unless the dog is already in and out of consciousness.  Keep a small bottle of hydrogen peroxide handy if you have a dog, and mix 1 teaspoon with 1 teaspoon of water.

Give this to the dog, via eye dropper if necessary, up to 3 times. But do contact your Vet or an emergency clinic right away too.  If your small dog has eaten raisins or grapes, his life may well depend on your fast action.

Keep regular hydrogen peroxide from the drug store handy in your home if you have a dog.  It can be mixed with equal parts water and given to the dog to induce vomiting.