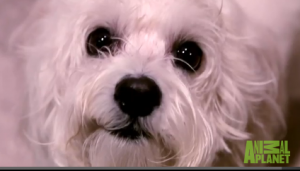 Could your small dog be a therapy dog?

Here’s a really heartwarming story: small dogs being deployed to support and even heal sick children.  McKenzie the Maltese is just one of the many small dogs who perform this important, and amazing function.

We often think of therapy dogs as Golden Retrievers…. who doesn’t love a Golden? But dogs of all sizes and breeds, and even “unbreeds” are doing great work with children and adults, providing affection and comfort in time of need.

The first recorded therapy dog was a Yorkie 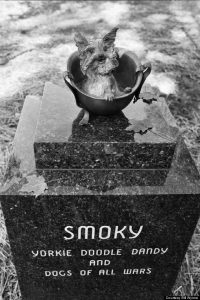 Smoky was a famous Yorkshire Terrier, found wandering in the jungles of the island of New Guinea during World War II. Corporal William Wynne won this little pup during  a card game, and before you know it, she was contributing to the war effort. Part of the U.S. Army’s Signal Corps, Smoky did lots of important missions – for example, she helped run an underground cable through a tunnel, saving soldiers days of labour and dangerous exposure to the enemy.

After the War, Col. Wynne brought Smoky home, and the pair began visiting hospitals, hoping to cheer up patients.  Dr. Charles Mayo, of the famed Mayo Clinic, noted the positive effect little Smoky had… and so for the next 12 years, she worked with sick, handicapped and palliative-care patients, bringing joy wherever she went!

Therapy dogs aren’t the same as Service Dogs; they don’t have the same access to public areas, restaurants, etc.  Therapy Dogs do undergo rigorous training however; and of course must have an exceptional personality.

To learn more about Therapy Dogs and see if YOUR MORKIE could be one, please visit –