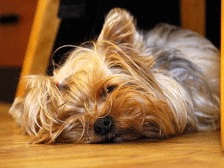 of tainted food.  At first, the recalls were associated with the consumption of wet pet foods made with wheat gluten from a single Chinese company.  At the time this was the problem:

While blatant deception like this is rare, pet food recalls are here to stay.  Just this month, 5 manufacturers have recalled dozens of dog food brands.  And some of these dog food recalls are from highly reputable companies, including —

They’ve been recalled because of possible contamination with Salmonella bacteria.

There are more than 2,000 strains of Salmonella and all are very toxic. And, they can be passed from animals to humans.

Symptoms of Salmonella poisoning in dogs include: high fever, severe diarrhea and vomiting, very  rapid heart rate, lethargy and even shock. If you suspect your dog is affected, please get immediate help from your Vet. A small dog like a Morkie can be at serious risk.