Does your Morkie do a crazy thing called a reverse sneeze?  It can sound like the start of an asthma attack or choking but it is literally a REVERSE sneeze.  Instead of air being expelled quickly FROM the nose, in a reverse sneeze, air is quickly pulled IN through the nose, and it’s noisy!

Here’s an example in a Maltese:

For many small dogs, it’s a normal part of the day – and if it isn’t disrupting his life too much, it’s nothing to worry about. At least – it certainly SOUNDS much worse than it is.

Rule out these causes first:

Experts say it’s highly unlikely to be one of these causes… it’s just, well, reverse sneezing!

According to Mercola’s HealthyPets website, it’s time to see the veterinarian if your Morkie is experiencing prolonged episodes of reverse sneezing, bloody or yellow discharge from the nose, or any other accompanying respiratory problems.

The biggest problem with reverse sneezing

…is the owner’s response.

Many Morkie owners freak out when their dog starts this behaviour and so they in turn, scare the dog… who will do some more reverse sneezing.  It’s a vicious circle.

And the crazy part is, there’s no reason for the owner to freak.  Smaller dogs, with their smaller throats and windpipes, are more prone to this, as our the “Brachycephalic breeds” like pugs and bulldogs with flattened faces.

Officially called ‘pharyngeal gag reflex’ reverse sneezing, unless it’s constant, is nothing to worry about, so keep calm and your Morkie will too! 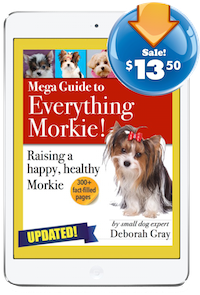 Want to learn more about Morkie care? Check out the Complete Guide to Everything Morkie, a downloadable ebook here.  Right now, this 300+  page guide is only $13.50.