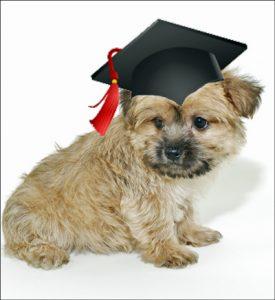 Dogs can be smart in different ways; for example some dogs may excel at learning new tasks. Others may seem very, very smart because they are able to read your mind! Others learn tricks so easily that their intelligence must be high.

How smart is the Morkie compared to other breeds, and how is dog intelligence even measured?

According to famed pet behaviourist Stanley Coren, PhD, author of Born to Bark, there are three major types of dog smarts:

Comparing breeds can be hard for the first two types, but there’s a wide range in brainpower among breeds in the last category — working and obedience intelligence.

On that scale of ‘trainability’ the Border Collie is the smartest dog around. But Poodles, Labs, Rottweilers and German Shepherd Dogs are no slouches either.  Here’s a list of the top 10 smartest dogs, according to the American Kennel Club (AKC):

Bottom of the class 🙁

All dogs are very clever when it comes to social interaction, with each other or with their humans.  In fact, the average dog can learn 165 words – and smarter breeds, up to 250. That’s like a 2 year old child.

Dogs raised in a mentally stimulating environment can learn faster and will seem smarter.

Are the smartest dogs the best pets?

Not necessarily. In fact very smart dogs can be challenging. They often need more attention and can be very demanding.

So what about the Morkie?

The only way we can really rank the Morkie, is by looking at his parents, the purebred Yorkshire Terrier and the Maltese.

Here’s how Dr. Coren ranks them:

So is your Morkie more on the “smart” Yorkie side, or more Maltese intelligence? 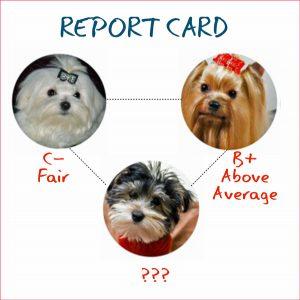 If you’re a Morkie owner, you probably rank your pet as THE smartest of all dogs.  After all, Morkies’ sweet nature and willingness to please, make him the best dog around!

So how smart is YOUR Morkie?

Which dog is the perfect pet for you and your family?

If you’re like me, it can be really tough deciding between dog breeds.  You can narrow them down, but it seems there are always two left and you just can’t decide. For me, it’s Yorkshire Terriers and Maltese Dogs, but happily, I can have “both” when I get a Morkie – the happy results when a Yorkie and a Maltese are bred together. Let’s take a look at all 3 breeds.

The popular Yorkshire Terrier or Yorkie

Every now and then, a dog or a breed comes along that just steals your heart.  For many people, that dog is the Yorkshire Terrier.  In fact Yorkies are the #6 most popular pure breed dog in America* and in some cities, like New York, they’re #1.

Yorkies are smart, energetic little terriers, in brown and tan. They are relatively new as far as pure breeds go, developed in northern England in the 1850s to work in coal mines and factories to catch and kill rats and mice. Those Yorkshire Terriers were much bigger – about 15 pounds at least — and were kept by working men to catch vermin. But when upper class ladies first saw these dog they fell in love and Yorkies soon left their humble beginnings for a more comfortable life.

Often described as “feisty,” Yorkies may be classified by the Kennel Club as “toy dogs” but they are also real terriers – the ideal Yorkshire terrier character or “personality” is described with a “carriage very upright” and “conveying an important air” according to the Kennel Club of Great Britain.

Though small, the Yorkshire Terrier doesn’t know it! He is active, loves attention and should not show the soft temperament seen in lapdogs like the Maltese according to the breed standards, the official benchmark developed by the American Kennel Club.

The Maltese dog on the other hand, is not as well known.  Maltese ranks as the 29th most registered breed in 2014, behind less common dogs like the Pomeranian, Havanese and the Pembroke Welsh Corgi.

Maltese are an ancient breed, developed strictly as lapdogs since the time of Aristotle.  Maltese descended from one of the original six dogs –  a Spitz-like dog which was bred for hunting rodents in the marsh and wooded areas.

The Maltese breed spread around the world because like gold, frankincense and myrrh, the Maltese was an exotic article of trade.  Caravans took Maltese to the farthest reaches of the civilized world, including the Middle East, Tibet, China, the Philippines and Japan.

Their most treasured qualities are their affectionate, loving natures and beautiful, pure white coats.  Maltese were bred to be super affectionate lap dogs, content to sit quietly for a great part of the day. They are very gentle and loving. Maltese were not bred to chase down mice and rats like the Yorkie. They weren’t bred to do any specific kind of work like many other breeds.  They have no other purpose than to be a pampered pet.  So it’s no surprise they are very sweet-natured.

A symbol of wealth, Maltese were prized by the upper class, aristocrats and royalty and bred to be with people. That explains their engrained people-pleasing, loyal and affectionate behaviour.

However, sometimes Maltese forget they’re small and can seem fearless.  Maltese will usually bark when someone new comes into the room or is at your door – his mini-watchdog side coming out. Not all dogs are described as “small dogs with big hearts, but both the Maltese and Yorkie are!” 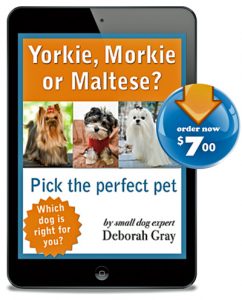 Order the ebook and learn more! 110 fact filled pages to help you decide which pet would fit best in your family. Instant download just $7.00 and of course, it’s 100% guaranteed satisfaction. More details.

The Morkie – the best of both worlds?

Both the Yorkie and the Maltese are wonderful companion animals, with plenty in common, but enough differences to make their offspring – the Morkie – a very interesting little pup too.

If you decide to go with a Morkie, you’ll find the characteristics, looks, behaviour and health of both parents, the Yorkie and the Maltese, apparent in the Morkie.

But since the Morkie is so new, you don’t really know which breed’s qualities will dominate, and even which parent the Morkie will most resemble physically. That explains the wide range in looks of the Morkie. he can be nearly white, with flopping down ears – thus very close to the Maltese.  Or dark haired, with prick ears, like the Yorkie. And of course everything else in between, like a black white and beige Morkie with one ear standing up and one a little floppy.

The Many Faces of the Morkie!

**Good job you found us!

Simon Cowell, a well known meenie music mogul who seems to love to make performers cry, is a baby at heart himself. How do we know? This great big 6’4″ man LOVES Yorkies! Enjoy these photos.

Want to learn more about these 3 wonderful toy dogs, the Yorkie, Morkie and Maltese?

When you cross these two pure breeds, you get a Morkie, the magical blend of Yorkshire Terrier and Maltese. These dogs may look similar….

But they’re really quite different from one another.

In my ebook, Yorkie, Morkie or Maltese – Pick the Perfect Pet, you’ll find 110 pages of invaluable information comparing the three breeds – Yorkies, Morkies and Maltese.  The pros and cons of each.  No hype, just help! Instant download for $7.00