Why does my Morkie eat grass?

Does your Morkie eat grass? And does it worry you? It shouldn’t… eating grass is perfectly normal for dogs (and cats) and it doesn’t hurt them.  But why do dogs eat grass anyway?

Well, the truth is, no one really knows why dogs eat grass. But there are lots of theories.

Dogs are like us – they’re omnivores. That means they eat everything.

An omnivore gets energy from both plant and animal foods. Other omnivores include bears, pigs, hedgehogs, and chimpanzees. And the very weird walking catfish, which eats both aquatic weeds and small fish.

The other types of eaters are the carnivore, which eats only meat. Examples are the polar bear, lions, tigers and the fox. Some people think dogs are carnivores, but they’re not since they like – and can digest – other food too.

The third type of eater is the herbivore, who eats only plant material. This includes cows, deer, giraffe, the giant panda, and most fish.

Often, your Morkie may eat some grass and then vomit a little. That’s because grass has a mildly emetic effect. In other words, it makes them feel like barfing. But… dogs can also eat grass without barfing, which leads us to the third theory about why they do it:

Maybe grass is the Caesar Salad of the canine world? Lots of dogs simply like the taste of grass. It’s fresh, it’s free and it’s handy.

If your Morkie is not eating too much grass, or is not eating a lot of grass and then vomiting a lot, then no worries. It’s just another of their odd little behaviors.

Satisfy your Morkie's craving for grass

Or his desire for his very own Chia Pet

Barley Dog is the original “green” supplement made from juice of young Barley grass with a bacon-like flavor.

Hard Red Wheat. Harvested in the US. Guaranteed to grow.

Organic Wheat Grass Seeds for Your Dog or Cat

Grow wheatgrass yourself for dietary or nutritional reasons. You can grow wheatgrass for yourself, or your pets! Cats and dogs love wheatgrass, which then makes it, well, CATGRASS, hmmm, dog grass?! Yes, that’s right, Cat Grass and wheatgrass are the same thing!

100% Organic NON GMO – Hard Red Wheat. Harvested in the US. Guaranteed to grow.

Every batch is tested for pathogens as well as germination rate.

Chia pet is a fun and amusing gift for any age and any occasion! This beautiful handmade decorative planter gift will leave anyone with a smile. Comes with a convenient plastic Drip tray and Chia seed packets for 3 plantings!

Planting and care instructions included. Expect to see a luxurious Chia coat in about two weeks.

Tip: mine worked really well with a little daily misting.

Why does my Morkie eat grass?

Wondering why your dog eats grass?  Experts aren’t exactly sure, but there  are plenty of theories.  Some include…

Any and all of these theories are possible – it depends on the dog and the circumstances.  Some dogs seem to gulp down grass when they’re not feeling well, and sure enough they will vomit shortly after.  But that’s probably coincidental, since grass doesn’t CAUSE the vomiting, Veterinarians say.

Other dogs eat grass and ARE NOT sick. They just like it!

And since dogs are natural scavengers, they’ll eat what they find if they’re hungry or even just bored.

One thing for sure: it’s normal and it can’t hurt

Many dogs eat grass and it’s normal behaviour.  It can’t hurt them at all – unless the grass has just been fertilized or if pesticides have been applied recently.

So if your Morkie likes eating grass, be sure to use natural treatments on your lawn, or grow a special patch or pot of ‘all natural’ grass.  Be careful and don’t let your Morkie chow down in public areas since you don’t know how that grass has been treated. 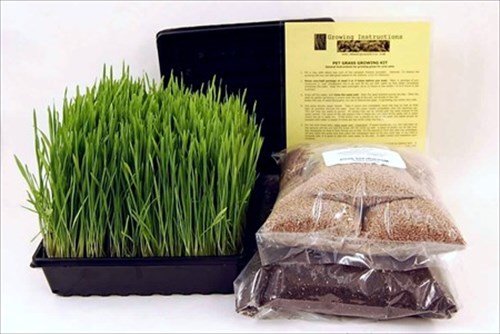 Just click the picture to read more about this product at Amazon.com

Amazon has a dog and cat wheatgrass growing kit for pets – the results are pure and tasty! 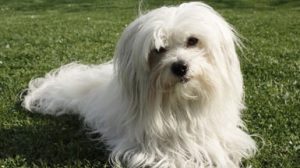 Dog expert Cesar Millan recommends adding  some natural herbs to your dog’s diet if he’s eating a lot of grass. These can include grated, fresh Ginger root to settle an upset stomach; Milk Thistle to protect liver functions; or organic Aloe Vera juice as an overall kind of tonic that will also fight against gas, constipation and infections (maximum 1 oz per 10 pounds of body weight daily). Natural Aloe Vera gel, found in the leaves, can be applied directly onto the skin to treat burns, scrapes and minor skin irritation.

The ASPCA site warns however, that ingesting  Aloe Vera gel or the plant itself can have negative effects on dogs, such as vomiting and diarrhoea. The juice of Aloe Vera liquid, in very small quantities on the other hand, can be quite beneficial.