The difference between Yorkies and Maltese

And why it matters 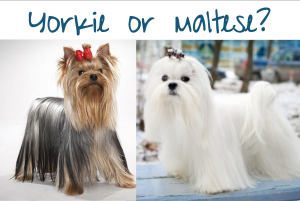 If you’re thinking about getting a Morkie, that combo of Yorkshire Terrier and Maltese dog, it’s good to understand the basic differences between these breeds.

First, if the Morkie is first generation cross – that is, his mother was a Yorkie and father a Maltese, or vice versa, then it’s hard to say which breed will dominate.  It’s not as simple as a 50/50 blend.  Over time, conscientious breeders will choose the best Morkies to breed with one another, to produce the desired qualities in a dog.

The problem is, there aren’t that many Morkies to breed to one another, so the gene pool is pretty shallow, as they say. That means that some of the less-than-perfect genetics get passed along and in fact multiplied. That’s happening to Giant Pandas who are now bred in captivity.  The result for Pandas is low birth rate, infant mortality and infertility.

But back to Morkies…. to understand them, it’s key to realize that their parent breeds hugely impact what they will be like.

While Yorkies and Maltese dogs have lots in common, they do come from very different origins. 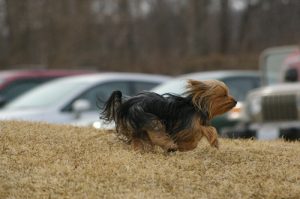 A Maltese puppy having a run.

The Maltese is one of the very few ancient breeds.  It can be traced back to about 500 B.C. and was a very popular pet for the elite of the Roman Empire.  Aristotle himself was intrigued by them, although he DID compare Maltese to a type of weasel! (370 B.C.)

Over the years, the Maltese has been continually bred to be an affectionate. beautiful  and loyal laptop companion.  It has been downsized by cross breeding to poodles and miniature spaniels.  The pure white coat is a result of very selective breeding primarily in the 17th century to eliminate any other colours. 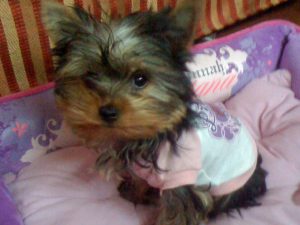 The Yorkshire Terrier on the other hand, is a very “new” breed. It was developed in the 1800s in England by factory workers, to help them catch rats.  If you know any Yorkies, you know they are very determined little creatures, and will play “fetch and shake” with their little toys all day long.

Yorkies are the result of breeding a number of different terriers together to get the qualities the original working-class owners needed in a helpmate.

Then British aristocratic ladies discovered them, and Yorkies were selectively bred to be even smaller and more affectionate.  (By the way, they were downsized sometimes with Maltese dogs!)  Their pet status was certainly cemented by the time the Yorkshire Terrier was introduced to Kennel Clubs in England and America in the 1880s and 1890s.

What’s bred in the bone

Those early origins of the breeds that make the Morkie are important. One is a companion animal through and through, bred to be a loving and glamorous pet.  The other comes from a working class background, scrabbling to pay his way as a rat-catcher.

What your Morkie will become, or which way he’ll lean, isn’t really known and is certainly part of the fun of a mixed breed!