It’s January 9th and one New York shelter that specializes in small dog rescue already has 32 discarded Chihuahuas among other breeds.  These dogs were Christmas gifts and the owners have already become bored with their “gifts.”  Because celebs and the Taco Bell dog have made breeds like Chihuahuas so popular, they’re now the second-most euthanized dog in America.

Dogster reports that Precious Pups –  a registered charity and no-kill shelter was already quite full before this Christmas rush.  Founder Laura Zambito says “We rescue our dogs from municipal animal shelters, off euthanasia lists and we accept owner surrenders and the occasional stray. We provide a safe haven for them, we nurture their spirits and heal their souls. We rely solely on donations to keep our dogs safe, happy and comfortable until we find them a forever home.”

As VeterinaryPartner.com points out, Christmas Puppies Are a Very Bad Idea.  And even though many reputable breeders and even shelters won’t release a dog in time for Christmas, this sad story plays out far too many times.

People who pick a breed because it’s popular are under-informed and naive.  The Chihuahua, for example, is known to be a warm weather dog, is not a family dog and can be territorial and bark a lot.

Should a pet ever be a gift?

As a recipient of two ‘surprise’ dogs over the years, I say NO!  And I’m an adult who loves dogs and has always owned dogs.  So I can just imagine a pre-teen for example, who gets their dream puppy, only to move on to another distraction a couple of weeks later.

Money for clothes for the dog, but not an ID tag! 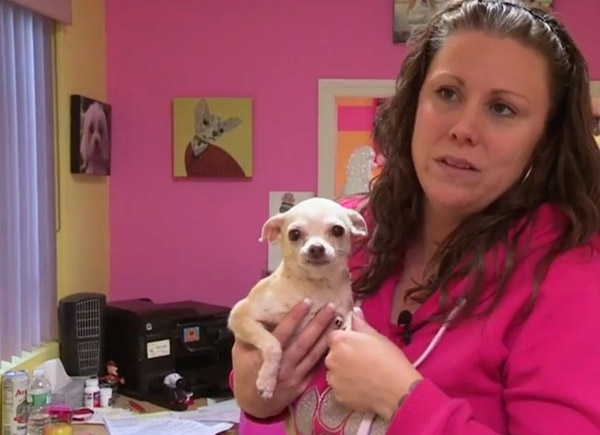 Laura Zambito shows off Vanilla, who came into the shelter with a dress and mammary tumours. Credit: Dogster.com

Dogster reports that one of the dogs that Zambito shows off is a Chihuahua named Vanilla, who was found wandering the streets wearing a little dress, but with no ID that could be used to return her to her owners.

That’s symbolic of the problems of owners who casually decide to get a dog: There’s money for the cute, frilly dress, but not for tags or a microchip.  And apparently no money for a Vet either because this little dog had mammary tumours as well.

To learn more about these dogs, or others looking for their forever homes, please visit Precious Pups, or check out PetFinder — the #1 site for adoptable pets or Petango.  Both these sites gather information from local shelters and humane societies across North America, so finding a new pet near you is easy.