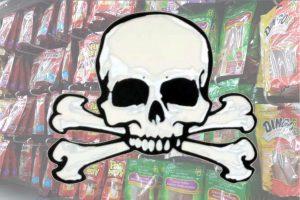 Some 500 dogs and nine cats may have died after eating chicken jerky pet treats made in China, according to updated complaints logged by U.S. federal veterinary health officials.*

One dangerous new trend in dog snacks is dried “jerky” type treats – often made from what’s called novel protein – duck, venison, fish, rabbit, etc.  Most of these treats however, are made from regular chicken.

Why is it potentially dangerous?

Many of these dried meat strip treats are made in China, and have been recalled because of Salmonella concerns, unknown or falsified additives (like the amount of glycerine used) and worse.  You can read more about these pet snack food recalls at DogfoodAdvisor.com  I recommend that while you’re at that site, be sure to sign up for the no-obligation dog food recall emails

Waggin’ Train and Canyon Creek Ranch Chicken Jerky, both from Nestle Purina, have been recalled this year because of antibiotic residue. These antibiotics not approved in the U.S. and other major countries, but are used for poultry in China.  Del Monte Corp.’s  Milo’s Kitchen Chicken Jerky and Chicken Grillers home-style dog treats have also been pulled from shelves nationwide because of the same thing, along with Harz Chicken Chews Soft and Tenders and Hartz Oinkies Pig Skin Twists

Although Purina claims this isn’t really a safety risk for pets, they did comply with a request from New York State authorities to take the product off shelves.  (You can read more here).  One reason was the concern about “the differences between U.S. and Chinese regulations.”  NO KIDDING!  Our favourite neighbourhood pet food chain has refused to stock any snack foods from China at this point, until there’s more clarity about how potential problems are being handled.

Breeder’s Choice Pet Food has issued a voluntary recall for a single batch of Active Care Biscuits-Healthy Dog Treats due to the presence of mold.

Strippin’ Chicks Pet Treats by Diggin’ Your Dog has been recalled because of concerns about Salmonella poisoning. Other snacks pulled this year for the same concerns include:

As a concerned pet owner, I’d recommend you do the same – check where the snack foods are made and if it’s China, avoid it, certainly for now. 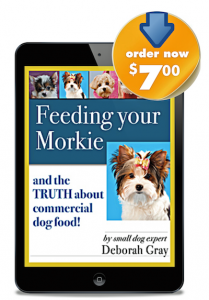 Want to know what’s really in your dog’s food?  This 61- page downloadable e-book helps you understand labels, and decide what feeding style is best for your small dog – commercial food, raw, homemade and more.  Just $7.00 to download.