Yorkshire Terriers and Maltese are part of the Toy Group of Dogs…. one of the 7 Groups recognized in North America. All purebred dogs have been divided into 7 groups which include Sporting Dogs, Hounds, Working Dogs, Terriers, Toys, Non-Sporting Dogs and Herding Dogs.

Even though they are Terriers, Yorkies are part of the Toy Group, along with the Maltese. Other Toys include the Chihuahua, Italian Greyhound, Pekingese, Pug and Papillon. 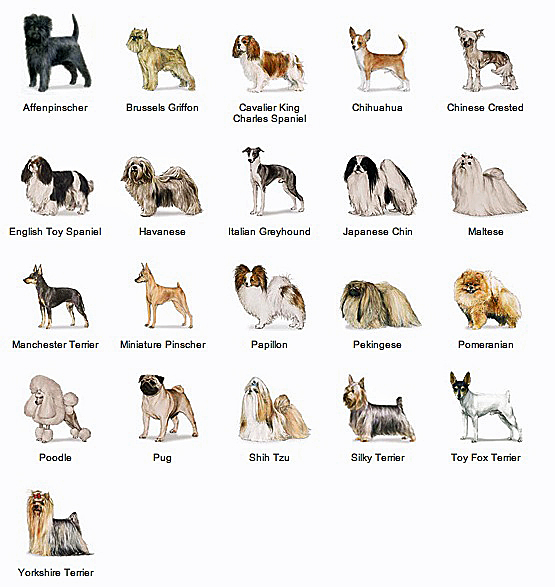 The 21 Toy breeds recognized by the American Kennel Club or AKC.

Pros and Cons of Toy Dogs 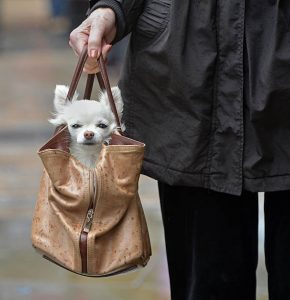 Toy dogs are sometimes called Purse Puppies. You can see why.

Remember that even though they might look like little stuffed animals, toy dogs can have all the less-than-desirable behaviours of other, bigger dogs including:

Pros and Cons of the Maltese Dog

Not quite grown up, this Maltese puppy is one big fluff ball.

A symbol of wealth, Maltese were prized by the upper class, aristocrats and royalty and bred to be with people. That explains their engrained people-pleasing, loyal and affectionate behaviour.

Tradition has it that Maltese were bred to bark to warn the ladies of the court that their husbands were returning. So Maltese will always bark when someone comes to the door!

Excessive barking is one of the biggest problems owners complain about with Maltese dogs. Maltese are often too quick to sound the alarm at every new sight and sound.

In fact in Australia, Maltese are one of the most dumped dogs because of their barking. This is very sad because Maltese barking can be controlled.

Any dog can be taught to not bark excessively and to stop barking immediately when you tell them to. But this only works if you establish the right relationship between you and your Maltese, where you are the leader and he is the follower. It also means you have to find the find balance between protecting this tiny fragile dog and letting it stand on his own 4 feet as an animal!

So, on the plus side: Maltese are very affectionate and sweet. They’re gentle, sweet-natured.

On the cons side: they’re hard to housebreak, and need to be taught to not bark. Because they’re such people dogs, they don’t do well if left on their own for extended time, and can develop separation anxiety.

Maltese need lots of grooming unless you choose the puppy cut look.

Like any pure breed dog, Maltese have their own set of have hereditary health problems. That doesn’t mean the Maltese will automatically have health issues, just that they are some conditions he’s more prone to.

Pros and Cons of the Yorkshire Terrier 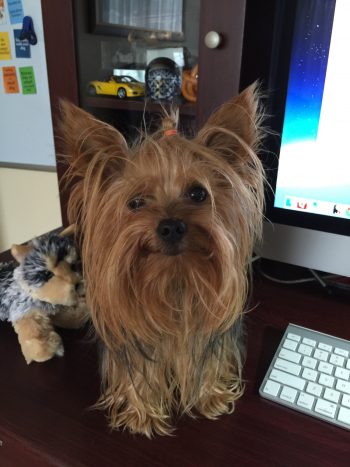 Glamorous but feisty, the popular Yorkshire Terrier has a vivacious spirit and a loving heart. It was originally bred in Yorkshire, England for the not-so-glamorous job of keeping down the rat population in the coal pits and cotton mills.

Yorkshire Terriers are a relatively “new” breed, having been developed in the mid to late 1800s as companions to the working class… ferreting out rat and mice in the weaving looms, chasing down rats in the mines and generally working as hard as their masters! The Yorkshire Terrier is a small, toy sized dog with a huge personality. In fact, Yorkies seem oblivious to their size and can dangerously aggressive with larger dogs, something owners need to watch for.

The Yorkshire Terrier is an almost perfect dog according to most owners: he’s smart, affectionate and loyal. But like any breed, there are downsides.

Pros and Cons of the Morkie

The gorgeous Morkie, often called the best of both parent breeds.

Now that you know more about the Yorkshire Terrier and the Maltese dog, you’ll understand Morkies, the result of cross-breeding them. The ideal Morkie combines the best of both breeds. Be aware however, that you can get any combination of any of the characteristics found in either breed. A Morkie isn’t simply 50% Yorkie and 50% Maltese; how the two breeds combine is different every time.

You never know which parent your Morkie will most resemble. Your dog’s temperament will depend on the parents breeding and which parent the dog takes after.

When breeders start matching up second and third and fourth generation Morkies together, we’ll start to see some stability in the results. But for now, every Morkie is a unique little dog.

Yorkies are true terriers – spunky, smart and energetic. They’re loyal and affectionate and love to be active. The Yorkshire Terrier is a relatively new breed; in fact, it was developed in the 1860s in northern England to chase down rats and mice in coal mines and mills. (That Yorkie was much bigger than today’s version.)

The Maltese on the other hand, is one of the oldest breeds known. There are mentions of Maltese dogs as far back as 6,000 B.C. and Maltese have been shown in ancient drawings, art and writings. The Maltese has always been treasured for her loving, gentle personality and beautiful looks. Unlike the ‘working class’ Yorkie, Maltese were kept at courts for queens and princesses and can be little princes and princesses themselves. Combine them both, and you have a Morkie or Yorktese puppy – half Yorkie Terrier and half Maltese Dog.

From a reader: “My Morkie looks more like a Yorkie, and is a crazy dog. She is very yappy, very hyper and can jump on the highest bed. She is needy and loves to cuddle. She loves to be held and hates to be brushed. We keep her in a puppy cut because her hair is easily tangled. She is very sweet, but not a quiet dog. She has an undercoat that needs to be brushed out and hates to have it brushed.”