Why are dogs’ noses wet?

A nudge in the early morning from that cold, wet nose – yikes! Ever wonder why your Morkie’s nose is wet?

Noses are covered with a thin layer of mucous for several reasons. First, it helps regulate their body temperature. Dogs don’t have normal sweat glands like people, to control hot and cold. Instead, they sweat from their paw pads and nose only.

Second, that moisture on the nose increases its efficiency. Did you know dogs can lick scent chemicals off their noses, sending those scent chemicals to olfactory (smelling) glands in the mouth?

Third, dogs tend to lick their noses a lot.

What about a warm, dry nose? 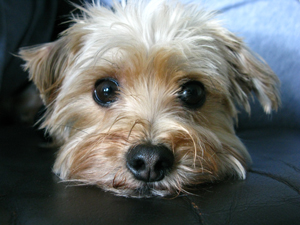 Not necessarily anything wrong with that. Some dogs don’t secrete as much moisture on their schnozzes, that’s all. Just be sure your Morkie isn’t dehydrated.

What do watch for

If your Morkie’s nose is suddenly all thick and yucky like he has a cold, he probably does. Look for other symptoms and see your Vet for treatment. He could have a serious upper respiratory tract infection.

Other than those obvious symptoms, the dog’s nose isn’t a general snapshot of his overall health. Temperature and moisture will fluctuate throughout the day. And each dog is different.

Better signs of a potential problem are not eating or drinking, lethargy, mood changes, reluctance to get up, and of course, vomiting or diarrhea.