Why do Morkies lick your face?

Ever wonder why dogs lick so much?  You just wash your face or you’ve just finished your makeup and boom!!! Dog kisses all over the place!

Generally, licking is sociable behaviour and it means, hey I like you… a lot!  It’s natural and it’s part of how dogs act. Think of little puppies – they lick their mother to tell her they want to be fed. She licks them to move them, groom them, clean them and show affection.

Other Reasons Small Dogs Lick Us

Attention is a big one.  It’s likely that you laugh and give the kisser lots of attention when he goes off on a licking tangent… so naturally when he wants your attention, he’ll do it again.

Saying “let’s play!”  Licking is also all about getting you to play, to open up and have fun.

And… dogs lick us because we taste salty and who doesn’t love salty?

If your Morkie is licking you obsessively, or licking herself or an object obsessively, chances are she needs some professional help.  First, have the dog checked for any neurological issues or allergies, according to dog guru Cesar Millan.  If there’s no physical problem, then it’s time to talk to your vet about ways to calm your dog down.  Obsessive licking often signals:

Licking can also be a submissive behaviour; in packs, the dogs and wolves who are lowest on the totem pole will  lick the dominant members of the pack, especially around their mouths. If your dog is obsessively licking, he may be too submissive to you. Are you over-correcting bad behaviours? Like rubbing his nose in the ‘accident’?  Are you too loud and forceful when you talk to your small dog?  These things can all create an overly submissive dog.

Want to stop so much licking?

Chances are you’ve encouraged this natural affection in your dog, so you can also gently discourage it too. 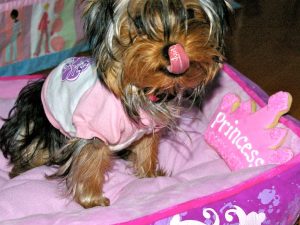 Whenever you’re patting your Morkie and he begins to lick too much, stop, get up and leave the room.  Don’t say anything – you don’t need to.  After a while, the dog will realize that if he licks too much, he won’t have the pleasure of your company 🙂

One of the licking-est breeds?

The Yorkshire Terrier is known as one of the big
kissers among small dogs. When I attended my first fun meet with my Yorkie, one of the contests was “most kisses in one minute” and it was crazy!  So if your Morkie has lots of Yorkie in him, this can be the result.