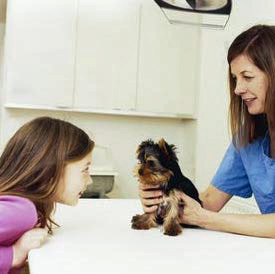 But what can you do? You want to keep your precious Morkie safe, plus rabies vaccinations are THE LAW. Aren’t they?

Yes, in most of Canada and right across the United States, dogs must get their rabies vaccinations boosted or redone, every 3 years. That’s despite these FACTS:

In fact, the AAHA themselves, the accrediting body for companion animal hospitals in the USA and Canada, published a statement in 2003 that said –

However, to remain politically correct with big pharma, they then backtracked, claiming “Revaccination every 3 years is considered protective.”

Did I mention that the AAHA is sponsored by 4 major big pharma companies who manufacture vaccines? Yup. Merck, Merial, Pfizer, and Boehringer Ingelheim.

It took the Association another 8 years to admit, “Among healthy dogs, all commercially available [core] vaccines are expected to induce a sustained protective immune response lasting at least 5 yr. thereafter”

How do we know?

Multiple experiments have been done by challenge – which means exposing the vaccinated dog to the actual disease. And by serology – blood testing which shows the level of antibodies still in the bloodstream. In all cases, the dogs were protected.

The MINIMUM protection is 7 years, in either test. Some shots, like distemper, offer 15 years of protection, demonstrated by scientific evidence.

Why not just get the shots?

Vaccinations have a large number of adverse effects on pets, especially small dogs. Just SOME of the horrific effects the rabies vaccine can have on dogs of any size include:

Take action for your Morkie’s health

First, check the laws in your area; you’ll almost certainly see that once every 3 years is sufficient for rabies shots. Do not exceed that, no matter what your Vet says.

Some places actually allow a TITER TEST – which is a simple blood test that shows your dog is still immune to rabies. This can replace the vaccination itself.

ALWAYS unbundle vaccinations. Never more than one at a time. I know, it’s a nuisance to keep going back to the Vet but believe me, it’s worth it.

Bundling vaccines together into one shot is one of the most dangerous practices rampant in the animal-care industry. And it’s particularly dangerous for small dogs, who are already more prone to bad reactions.

“When you add another treatment – even something as simple as a flea medication – your small dog’s system can be completely overwhelmed.

PLUS – The risk of adverse reactions is FOUR TIMES GREATER for dogs under 11 pounds than dogs who are 99 pounds or more. simply based on size alone, regardless of how many vaccines are administered at one time.

Confusion around vaccines is your worst enemy; learn all you can and: